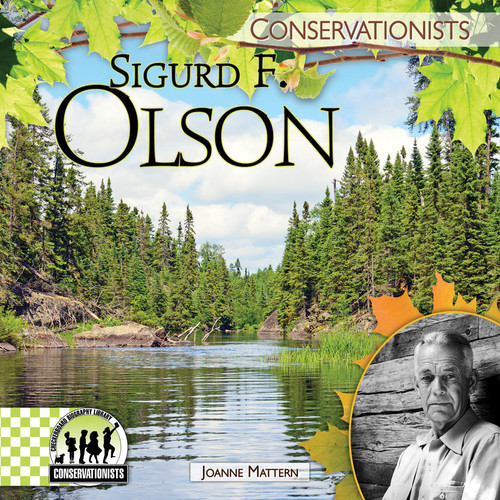 Extraordinary environments endure through the efforts of conservationists such as Sigurd Olson. In this engaging biography, readers will learn about Olson’s birth in Chicago, Illinois, his childhood in Wisconsin, and his later life in Minnesota. Readers will discover Olson’s early years as a wilderness guide in the international boundary area of the United States and Canada known as Quetico-Superior and his work to keep development out of the area, leading to the establishment of the Superior Roadless Areas which would later become the Boundary Waters Canoe Area Wilderness. Olson’s work on the National Parks Association and Wilderness Society are examined, as is his influence in drafting the Wilderness Act. Olson’s work in creating the Alaska Arctic Wildlife Refuge, California’s Point Reyes National Seashore, and Minnesota’s Voyageurs National Park are also included. Olson later spent his days experiencing and writing about nature. In turn, he has inspired generations of green pioneers.

The books reviewed cover the ordeals and achievements of two people responsible for the preservation of wilderness areas. The font is large and clear, engaging the young reader into the lives of these pioneers. The author examines the impact and legacy of these nature idealists and the organizations they founded. Photos of some of the animals whose habitats are saved will touch the children. Recommended.