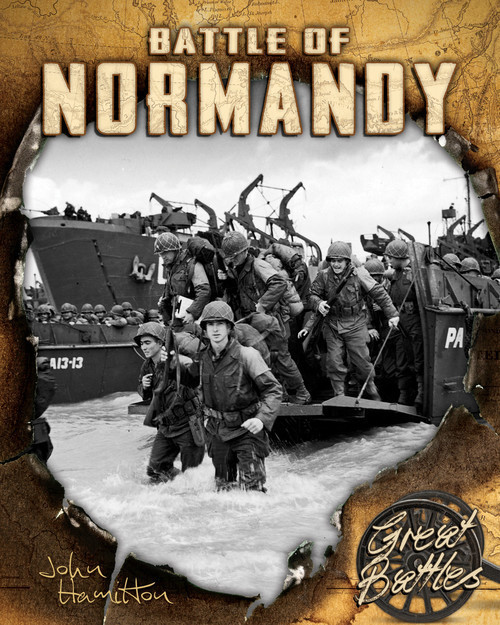 June 6, 1944. Find out why this date will live in infamy in Battle of Normandy. Learn what led up to this decisive World War II battle between the Allies and the Axis Powers. Get to know key historical figures, including American presidents Franklin Delano Roosevelt and Harry S. Truman, American general Dwight D. Eisenhower, American general Omar Bradley, British prime minister Winston Churchill, British commander Bernard Law Montgomery, Soviet leader Joseph Stalin, German leader Adolf Hitler, German commander Erwin Rommel, and German field marshal Gerd von Runstedt. Put yourself on Omaha, Utah, Gold, Juno, or Sword beach as you learn about military strategy and the resulting casualties of Operation Overlord, the invasion of Normandy. Learn what weapons and tactics were used, including invasions by land, sea, and air, tanks, machine guns, rifles, anti-aircraft weapons, and rocket launchers. Finally, discover the aftermath of this pivotal conflict. It remains the largest amphibian invasion in history, and the soldiers who made the journey from southern England to northern France on D-Day were part of a major turning point in World War II. Black and white and color photographs, illuminating quotations, maps, charts, a glossary, an index, and book links round out this exciting and informative title.