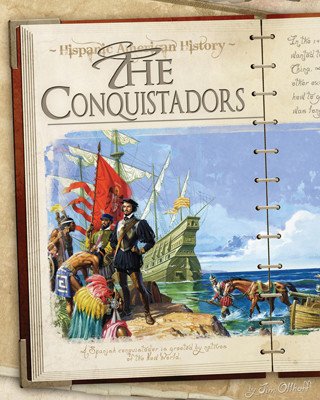 Hispanic American History follows the timeline of this proud and ethnically diverse culture. This title discusses conflicts arising from the throwing off of Spanish colonial rule and the loss of land to the United States. Major conflicts such as the Spanish-American War and the Mexican-American War are introduced. The book also includes key figures such as Simon Bolivar, Miguel Hidalgo, Vicente Guerrero, Santa Anna, and David Glasgow Farragut.

This series highlights the Hispanic American culture from Ancient America through the present, and would be good for upper elementary and middle school students. The illustrations are a helpful supplement to the text. The series would be an excellent tool to use during the celebration of Hispanic Heritage Month. Recommended.

Ollhoff’s clearly written texts trace Hispanic history from the Paleo-Indians, conquistadors, and African forbears. These books also discuss the rise and decline of Spanish colonial North America; the effects of Mexican independence; discrimination and Hispanic civil rights; and the growing political, economic, and social influence of the Hispanic population. The layout is attractive with full-page illustrations and photos, many with text superimposed on the images. This series will help students understand the scope and significance of Hispanic history.