This product is not available for purchase: Status is Out of print 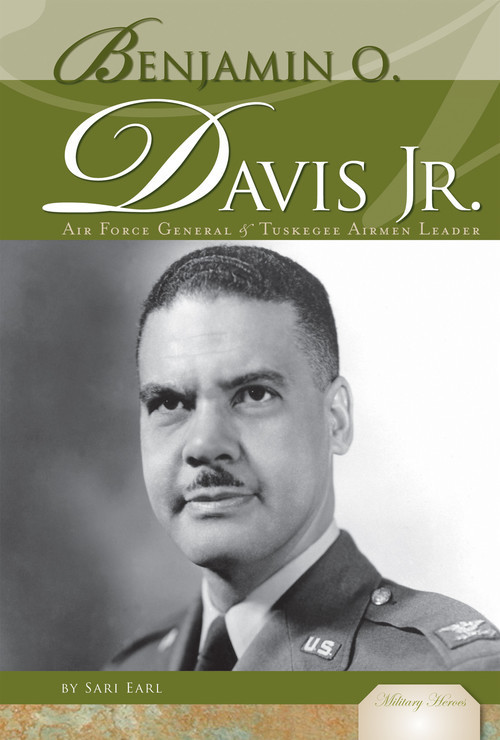 This title examines the remarkable life of Benjamin O. Davis Jr. Readers will learn about Davis's family background, childhood, education, military career, and societal contributions. Covered in detail are Davis's leadership roles at the Tuskegee Institute and in the military during World War II, the Korean War, and the Vietnam War. Color photos, detailed maps, and informative sidebars accompany engaging text. Features include a timeline, facts, additional resources, web sites, a glossary, a bibliography, and an index. Military Heroes is a series in Essential Library, an imprint of ABDO Publishing Company.

Davis first saw an airplane in 1926; from then on, he knew he wanted to fly. Despite many forms of discrimination, he made his way through West Point, eventually leading the U.S. Army Air Force African American flying unit, the Ninety-Ninth Squadron. Complete with time line, source notes, and additional web and print sources, this is a well-written, well-designed resource for upper-middle readers.

Filled with photographs and archival illustrations, this series presents a range of famous and lesser-known people involved in U.S. military history. In addition to standard biographical details, the texts also examine controversies and career flops as well as successes; sidebars provide historical context. . . . The texts are useful for reports.

The titles will be useful for research on these historical figures because they are easy-to-read and are richly illustrated with historical photographs, color pictures, sketches, and relevant maps. Generously illustrated timelines help students put events in perspective. Sidebars clarify important issues and concepts. Recommended.

Real events characterized by danger and excitement introduce readers to each individual’s character. The rush of literary adrenalin will hook readers immediately and keep them enthralled until the end. Given the dynamic topic of the series and each volume’s appealing layout, these books are likely to attract reluctant readers. In addition, sources are plentiful and well-documented, making the titles suitable for research projects. Other material is available on these subjects, but this series is noteworthy for its accessible writing, appealing layout, and high-interest history.

★STARRED★ Benjamin O. Davis Jr. was an American hero, and this attractive Essential Library volume does an excellent job of introducing him as well as the times that shaped him. Readers will get a real sense of what a trailblazer Davis was, while boys especially will find the war efforts of the Tuskegee Airmen exciting. Fascinating sidebars cover everything from segregation to Roosevelt’s objectives in WWII to the executive order integrating the armed services. …this is a well-written, well-designed (dappled borders add to the effect) book with plenty of black-and-white photographs to add interest. A time line, source notes, and additional web and print resources round out this title in the Military Heroes series.