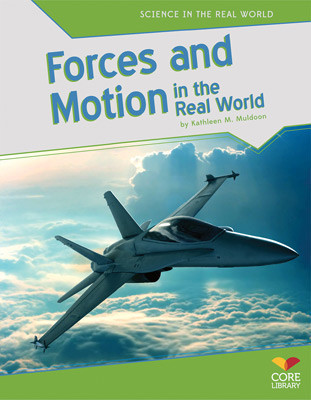 Forces and Motion in the Real World

Forces and motion are everywhere! This book uses real-world examples to bring the concepts of force and motion to life in an approachable way. Clearly-written text draws in readers with concrete examples involving familiar, everyday things, from the Hubble Telescope to a game of tug-of-war. The book covers the history of and key figures in the understanding of force and motion, including Galileo, Albert Einstein, and Stephen Hawking. Major concepts covered include Newton's Laws of Motion, friction, gravity, electromagnetism, weight, and momentum. Full-color photos, a glossary, an index, sidebars, primary source documents, and other creative content enhance the book. It also includes prompts and activities that directly engage students in developing the reading, writing, and critical thinking skills promoted by the Common Core standards. This well-researched title has a credentialed content consultant and aligns with Common Core and state standards.

Finely tuned to the needs and methods of a CCSS-based curriculum, these explanations of some aspect of the physical world intersperse a main text with recaps and review or study questions every few pages. The narratives are divided into easily manageable sections, and the clean design incorporates informative, crisply reproduced, captioned photos; reproductions; diagrams; and graphics. Sidebars often include short but substantial passages from primary-source documents with the requisite analytical glosses and questions to test comprehension. The volume on the history and uses (in and outside the lab) of the scientific method are particularly valuable.