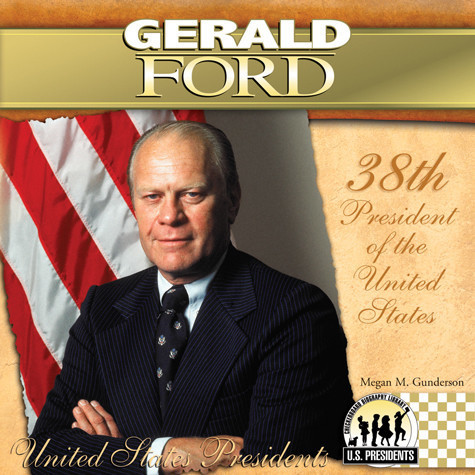 The United States president preserves, protects, and defends the U.S. Constitution. Each president's term influences events in America and around the world for years to come. This biography introduces young readers to the life of Gerald Rudolph Ford Jr., beginning with his childhood in Omaha, Nebraska, and Grand Rapids, Michigan. Information about Ford's football stardom and education and at the University of Michigan and Yale Law School, as well as his early career as a coach and a lawyer is discussed. In addition, his family and personal life, as well as his retirement years in Rancho Mirago, California, during which the Gerald R. Ford Library and Gerald R. Ford Museum opened, and Ford received the Presidential Medal of Freedom, is highlighted. Easy-to-read text details Ford's military service in the U.S. navy during World War II and his political career in the U.S. House of Representatives, where he served on the House Appropriations Committee, served on the Warren Commission, co-wrote Portrait of the Assassin, voted for the Civil Rights Act and the Voting Rights Act, served as minority leader, and then became the first appointed vice president under President Richard Nixon. Finally, students will explore key events from Republican president Ford's administration, including his rise to the presidency after Nixon's resignation due to the Watergate scandal, his pardon of Nixon, the end of the Vietnam War, and his survival of two assassination attempts. Beautiful graphics showcase the primary source documents and photographs. A timeline, fast facts, and sidebars help put essential information at students' fingertips. In addition, a quick-reference chart provides easy access to facts about every U.S. president. Checkerboard Library is an imprint of ABDO Publishing Company.