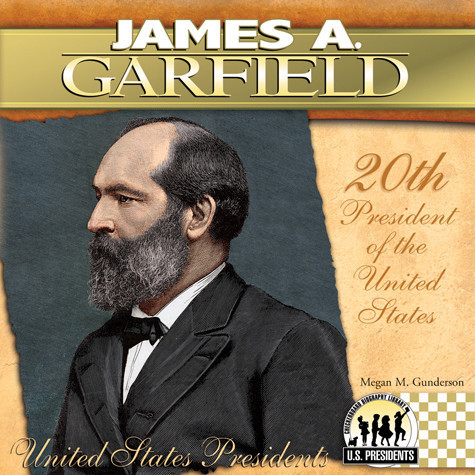 The United States president preserves, protects, and defends the U.S. Constitution. Each president's term influences events in America and around the world for years to come. This biography introduces young readers to the life of James Abram Garfield, beginning with his childhood in Orange Township, Ohio. Information about Garfield's education at Western Reserve Eclectic Institute, or Hiram College, and Williams College, as well as his early career as a canal worker, a teacher, a professor, a college president, and a lawyer, is discussed. In addition, his family and personal life are highlighted. Easy-to-read text details Garfield's military service in the Forty-second Ohio Volunteer Infantry during the American Civil War, during which he fought at the Battle of Middle Creek, the Battle of Shiloh, and the Battle of Chickamauga, and his political career in the Ohio state senate, and the U.S. House of Representatives, during which he served on the Committee on Military Affairs, the House Committee on Appropriations, the Banking and Currency Committee, the House Ways and Means Committee, supported a strong Reconstruction policy and the impeachment of President Andrew Johnson, helped establish the U.S. Department of Education and the U.S. Geological Survey, and became minority leader. Finally, students will explore key events from Republican president Garfield's administration, including his surprise nomination, his promise of civil service reform, the Star Route Scandal, and his assassination by Charles Guiteau. Beautiful graphics showcase the primary source documents and photographs. A timeline, fast facts, and sidebars help put essential information at students' fingertips. In addition, a quick-reference chart provides easy access to facts about every U.S. president. Checkerboard Library is an imprint of ABDO Publishing Company.