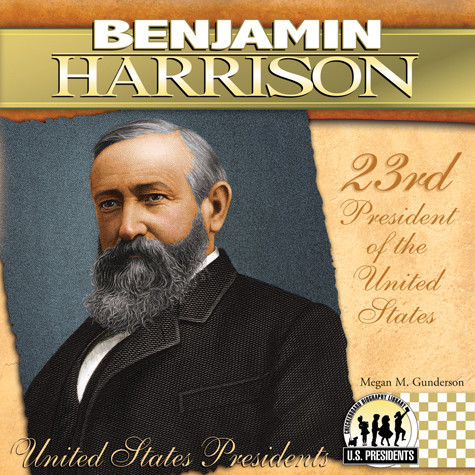 The United States president preserves, protects, and defends the U.S. Constitution. Each president's term influences events in America and around the world for years to come. This biography introduces young readers to the life of Benjamin Harrison, beginning with his childhood in North Bend, Ohio. Information about Harrison's education at Miami University, as well as his early career as a lawyer and a court crier is discussed. In addition, his family and personal life, as well as his retirement years in Indiana, during which he wrote This Country of Ours and Views of an Ex-President, is highlighted. Easy-to-read text details Harrison's military service in the Seventieth Indiana Volunteer Regiment during the American Civil War, and his political career as city attorney of Indianapolis, Indiana, reporter of the Indiana Supreme Court, and governor of Indiana, as well as on the Mississippi River Commission and in the U.S. Senate, where he spoke out against the Chinese Exclusion Act. Finally, students will explore key events from Republican president Harrison's administration, including his victory despite losing the popular vote, the Pan-American Conference, the Dependent Pension Act, the Sherman Silver Purchase Act, the Sherman Antitrust Act, the McKinley Tariff Act, and the Land Revision Act. Beautiful graphics showcase the primary source documents and photographs. A timeline, fast facts, and sidebars help put essential information at students' fingertips. In addition, a quick-reference chart provides easy access to facts about every U.S. president. Checkerboard Library is an imprint of ABDO Publishing Company.