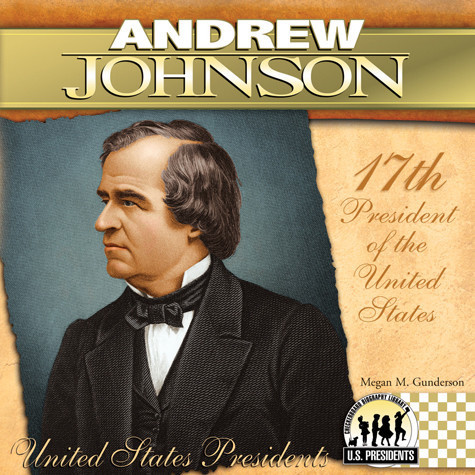 The United States president preserves, protects, and defends the U.S. Constitution. Each president's term influences events in America and around the world for years to come. This biography introduces young readers to the life of Andrew Johnson, beginning with his childhood in Raleigh, North Carolina. Information about Johnson's early career as a tailor is discussed. In addition, his family and personal life, as well as his retirement years in Greeneville, during which he became the only former president to serve in the U.S. Senate, is highlighted. Easy-to-read text details Johnson's political career on the Greeneville, North Carolina, town council, as mayor of Greeneville, in the Tennessee House of Representatives and the Tennessee state senate, in the U.S. House of Representatives, where he introduced a homestead bill and supported the Compromise of 1850, as governor of Tennessee, in the U.S. Senate, where he was the only Southerner to remain after the Southern states seceded, as military governor of Tennessee during the American Civil War, and as vice president under President Abraham Lincoln. Finally, students will explore key events from Democratic president Johnson's administration, including his rise to the presidency after Lincoln's assassination, Reconstruction, the Freedmen's Bureau, the Civil Rights Act, the Fourteenth Amendment, the purchase of Alaska, the Tenure of Office Act, and Johnson's impeachment by the House after removing Secretary of War Edwin M. Stanton from office. Beautiful graphics showcase the primary source documents and photographs. A timeline, fast facts, and sidebars help put essential information at students' fingertips. In addition, a quick-reference chart provides easy access to facts about every U.S. president. Checkerboard Library is an imprint of ABDO Publishing Company.