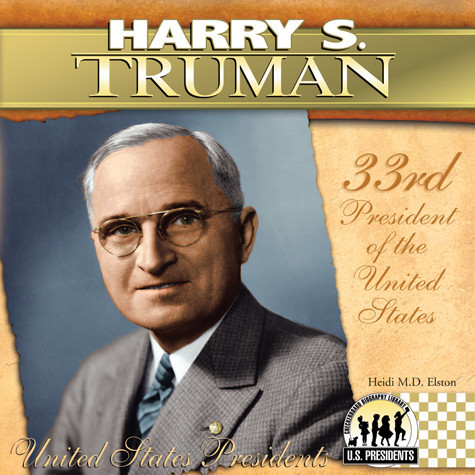 The United States president preserves, protects, and defends the U.S. Constitution. Each president's term influences events in America and around the world for years to come. This biography introduces young readers to the life of Harry S. Truman, beginning with his childhood in Lamar, Missouri. Information about Truman's education at the Kansas City Law School and his early career as a businessman is discussed. In addition, his family and personal life, as well as his retirement years in Independence, Missouri, are highlighted. Easy-to-read text details Truman's military service during World War I and his political career as a Jackson County judge, presiding judge of the Jackson County Court, a U.S. senator, and vice president. Finally, students will explore key events from Democratic president Truman's administration, including dropping atomic bombs on Hiroshima, Japan, and Nagasaki, Japan, the formation of the United Nations and NATO, the beginning of the Cold War, the Truman Doctrine, the Marshall Plan, the Korean War, and passage of the Twenty-second Amendment, the Taft-Hartley Act, and the Presidential Succession Act. Beautiful graphics showcase the primary source documents and photographs. A timeline, fast facts, and sidebars help put essential information at students' fingertips. In addition, a quick-reference chart provides easy access to facts about every U.S. president. Checkerboard Library is an imprint of ABDO Publishing Company.