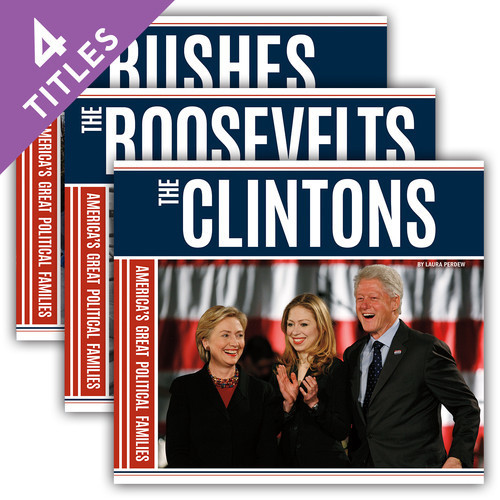 America's Great Political Families delves into the rich, storied history of some of America's greatest political families. Books in the series explore each family's history, their influence, the scandals, their contributions to society, and their legacy. Aligned to Common Core Standards and correlated to state standards. Essential Library is an imprint of Abdo Publishing, a division of ABDO.

Part of the America’s Great Political Families series, this entry about the Bush family does a solid job of introducing a clan that goes back in American politics four generations. The book begins on election night 1994. Jeb, running for governor of Florida, was expected to win, while George, hoping to be elected Texas’ governor, was expected to lose. The reverse happened, changing the political dynamic in the Republican Party, the country, and Bush family relations. Mooney then profiles the Bush political dynasty, beginning with Senator Prescott Bush; his son and president, George Herbert Walker; his sons President George and presidential contender Jeb; and Jeb’s son, George P., who already holds political office. Each profile is detailed and cogently written with sidebars providing needed extra information for topics like the Iran-Contra affair and the Iraq surge. An attractive design and many photos are a plus. This ends with Jeb still in contention for the 2016 nomination, but even kids will know how that turned out.

This series explains how forebears influenced recent presidents and their families who assumed the same or similar government positions, shaping politics thereafter. A conversational, encouraging tone and large font promote fast reading. . . . Interest is heightened with anecdotes and quotes. Personal flaws, scandals, and gaffes committed in office are included. . . . While always respecting the chief executives and their legacies, the authors’ consistent use of given names helps readers relate personally. Volumes are visually striking, with dramatic dark red, black, and white design elements; excellent photos; colored captions; and many informative sidebars and spreads. A clear, straightforward examination of some 20th-century leaders. Recommended for government, politics, and contemporary American history units.