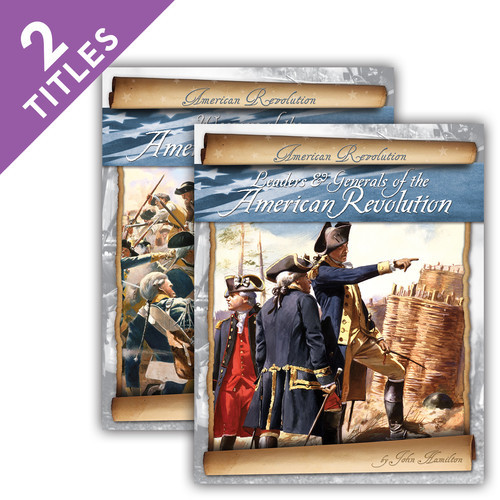 This series examines the roots of the war, the epic battles and key campaigns, the weapons, and the brave military and political leaders that guided the American patriots to fight for liberty. Maps, quotes, and historical photos help readers understand the conflict that brought the United States to life.

These richly illustrated volumes provide a brief survey of major events in the American Revolution, while dispensing with the usual introductory and concluding chapters. The vocabulary is clear and simple, with the use of action verbs and phrases that will appeal to boys who prefer to read about external action instead of discussion of intent or motive. Many of the illustrations are realistic battle action scenes that effectively support the text and will invite readers’ perusal.

Events are presented in a straightforward style that still manages to convey the author’s enthusiasm for the subject. Readers are immersed in the time period; facts and figures abound. Details include battle-by-battle statistics (the number of soldiers deployed, casualties, etc.) for both the Patriots and the British. Military strategy is also discussed. Leaders and Weapons are the strongest titles. Leaders is a showcase of movers and shakers from both sides of the war, highlighting figures such as “Mad Anthony” Wayne, who while influential, receives little coverage in books for youth. Weapons covers a topic that is of great appeal to many readers. Period painting reproductions, maps, and clear photographs (many of modern-day re-enactors) make this series appealing.