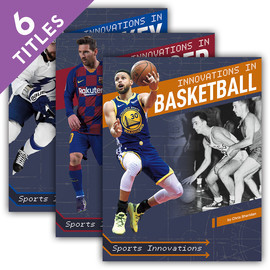 No game has stayed the same since its invention, a truth highlighted in this interesting series. Some of the biggest innovations in soccer haven’t involved tech, but have instead revolutionized play, like total football, tiki-taka, and pressing/counter-pressing. Auto-racing innovations haven’t just made the cars more powerful and efficient, but have made the sport safer for spectators (thanks, barriers!) and drivers (thanks, head and neck restraints!). Baseball is still played as much as it was in its early days, though standardization of bats and balls have made strides to even the playing field (even though the fields themselves aren’t completely standardized!). Football helmets have evolved massively over the course of the sport, but readers may not realize that forward passing wasn’t legal until nearly 40 years after the first football game was played. Filled with fascinating facts and engaging writing, this series is a real winner. VERDICT A first purchase.