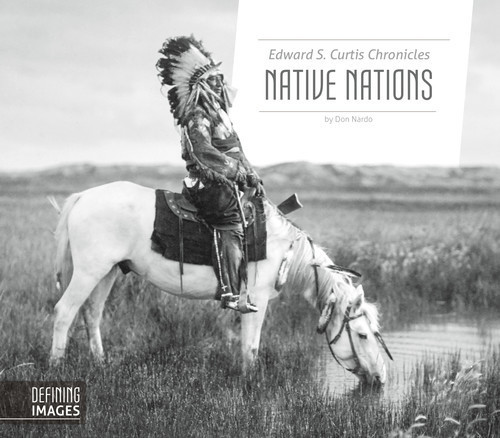 Edward S. Curtis Chronicles Native Nations considers the work of Edward S. Curtis as he photographed the people and cultural practices of a large number of Native nations. Using many stunning, full-page photos, it examines Curtis's role in the preservation of Native cultures, including criticism of his work and methods. Features include a glossary, references, websites, source notes, and an index. Aligned to Common Core Standards and correlated to state standards. Essential Library is an imprint of Abdo Publishing, a division of ABDO.

Iconic photographers who documented important moments in history are placed in front of the lens in this attractive series. While the value and artistry of their work is explored (including high-quality reproductions of their photographs), the text’s contemporary perspective doesn’t shy away from criticism.

★STARRED★ The contemporary perspective, however, is truly illuminating, addressing what Curtis got wrong; the hypocritical attitudes of Curtis’ contemporaries, who idealized Native culture while simultaneously enacting policies that laid waste to Native lands and traditions; and how Curtis’ stunning but highly romanticized images have continued to produce misrepresentations of Native American groups. Other modern scholars, though, admire Curtis’ tenacity and sheer artistry, and the latter is nicely on display in the large-format reproductions of his original photos. A well-balanced, highly informative take on a lesser-known American icon.