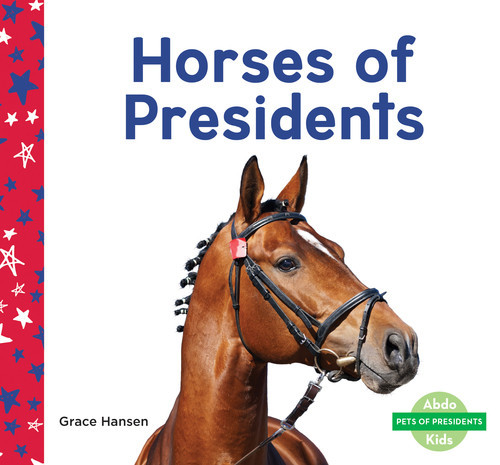 This book has it all: Bright and colorful images, historical photographs, and lots of sweet information about presidents and their pet horses. Readers will love seeing every pet owner, from George Washington to the Kennedys. Complete with a picture glossary. Aligned to Common Core Standards and correlated to state standards. Abdo Kids Junior is an imprint of Abdo Kids, a division of ABDO.

These bright, cheerful volumes introduce youngsters to the various animals that were owned by the United States presidents. Readers learn about George Washington’s parrot, Bill Clinton’s pet cat Sox, Franklin Roosevelt’s terrier Fala, and the more unusual animals, such as the alligator owned by John Quincy Adams and the wallaby possessed by the Coolidges. Interesting facts are interspersed, such as Rutherford Hayes had the first Siamese cat in the United States and Woodrow Wilson sold his sheep to donate money to the Red Cross. While some photographs are featured, most illustrations are modern pictures of the corresponding pets. Not only do these volumes serve to educate readers about presidents’ relationships with animals, they also provide insight into the humanity of these powerful people, thus making them more accessible to young readers. VERDICT These titles provide pleasant and informative introductions to the personal lives of the presidents and should be considered for purchase.