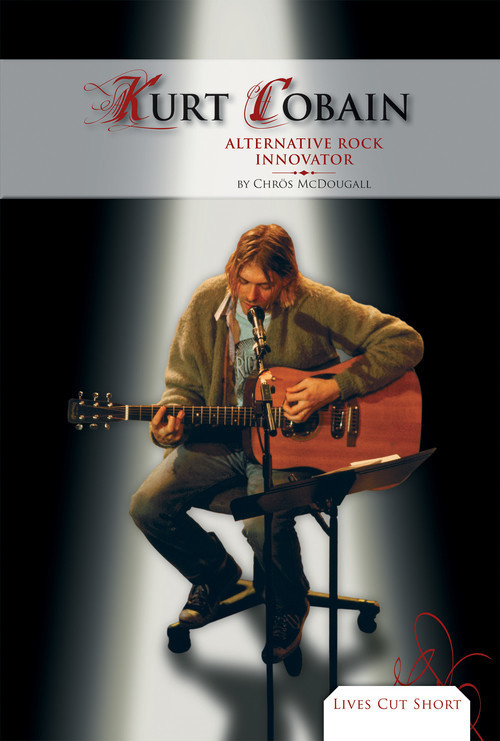 This informative title highlights the life of Kurt Cobain. Readers will learn about Cobain's background and his role in the formation of the groundbreaking band Nirvana. Cobain's unstable childhood in Aberdeen Washington is detailed as well as his drug and alcohol use. Cobain's early musical work is discussed, as well as his formation of Nirvana and his collaboration with Dave Grohl and Chris Novoselic. Nirvana's albums Bleach, Nevermind, and In Utero are introduced, as is the band's breakout hit Smells Like Teen Spirit. Cobain's courtship with Courtney Love is included, as is their marriage and the birth of their daughter Frances. Cobain's descent into heroin addiction is included, leading to his death by self-inflicted gunshot wound at age 27. This book includes details of Cobain's life and covers the controversies surrounding his life and death.

These books trace the lives of pop-culture notables from childhood to their sudden deaths, and the personal and professional triumphs and troubles in between. The narrative history has an informative tone, balancing opinions and quotes from the subjects and insiders close to them, and critics’ views, along with important facts and milestones. The books convey a sense of what made these performers legendary, how they influenced others, and why their legacies endure. The authors provide helpful context to the eras in which they lived. . . . Large color, captioned photographs appear throughout, and sidebars supply helpful background material. These up-to-date biographies should find an audience in middle and high school collections. While the books maintain that the tragic ends do not diminish their subjects’ accomplishments, the authors neither romanticize nor glamorize these lifestyles marred by substance abuse.

The dependable Lives Cut Short series adds. . .titles featuring celebrities who died prematurely. Each begins with a poignant quote from the late celeb, such as this from Marilyn Monroe: “You believe lies so you eventually learn to trust no one but yourself.” The books use many other first-person quotes as well as comments from people who knew the subject. Freed from the risk of libel, the authors generally treat their biographees with a mix of admiration for their achievements and honesty about the mistakes they made…making an excellent use of sidebars to explain and extend the information, with well-chosen photographs. Given the subject, it’s a bit macabre to say it, but this is one series worth continuing.

. . . impressive series is based on the premise that death comes to all of us, even the exceptionally good-looking. Although [the] books. . .come out almost indecently quickly following a celebrity’s demise, the writers are still able to construct a fully rounded picture of life. This adds depth to the stories and allows readers to see where tragedy may have had its roots.

Stars who died prematurely often lend themselves to particularly intriguing biographies. This series is solidly researched and impressively written, and information in sidebars and boxes helps give context and explanations to the main text.