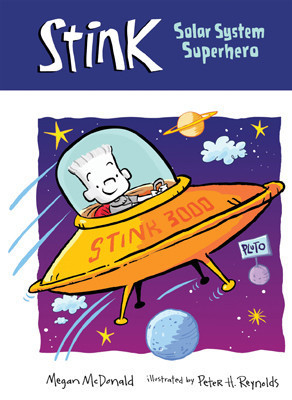 When Stink learns that Pluto has flunked out of the Milky Way for being too shrimpy, he feels like he might just explode with a Big Bang. Stink has no choice but to take a stand for the sake of little planets (and little people) everywhere. Will he be smart enough to defeat a panel of big-shot scientists? Will he be strong enough to beat know-it-all Riley Rottenberger and her "Team KPB"? Will he succeed in rescuing Pluto from a fate worse than being swallowed by a black hole? Start the countdown for a funny (and very informative) out-of-this-world adventure--and prepare to have your universe rocked!

Astrophysics facts combine with everyday second-grade school experiences in this lively chapter book in the Stink series. Shocked to hear the scientific fact that Pluto has been declared too small to be a planet, Stink stands up to both grown-up scientists and other kids when he starts a campaign to let Pluto back into the solar system. He even makes bumper stickers that read “Honk if you love Pluto.” The funny words (“double freaky-deaky”) and silly scenarios, illustrated in Reynolds’ wry, informative black-and-white drawings, make for a fast read about the triumph of the little guy and the wonders of the universe.