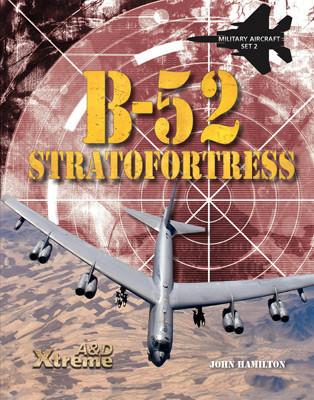 This title explores the development and use of the B-52 Stratofortress. Readers will follow the history of this long-range, heavy bomber and learn about its military and performance specifications. Features such as its bombing navigational computer and terrain computer, and its Electro-Optical Viewing System and GPS are detailed. Readers will learn about its weapon systems including the aircraft's mixture of bombs and air-launched cruise missiles, machine guns, cannon, advanced electronic systems, and terrain-avoidance radar. Readers will discover the aircraft's operational use in the Vietnam War and the Persian Gulf War. The Big Ugly Fat Fellow's eight engines are covered, as are the achievements and future of this important aircraft.

Young military enthusiasts will be drawn to this attractive set. Each chapter includes large, high-quality color photos that fill the page or the entire spread. The brief, but informative, text is placed over the photos. Print is in black or white, depending on the color of the background. The basic content covers the featured machine’s manufacturer, use, dimensions, crew size, history, and weaponry. Small red text boxes containing an “Xtreme fact” (e.g., “AC-130 gunships destroyed more than 10,000 enemy trucks during the Vietnam War”) are scatted throughout every volume. A brief caption accompanies most images. This set flies high above its competitors in this genre. . . .