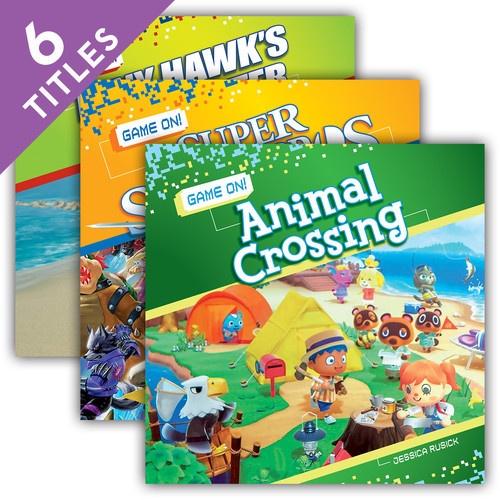 This series reveals the inner workings and impact of today's most popular video games! Each title explores the inception and evolution of a particular game, highlighting key creators, super players, and cultural crazes inspired by the game. Special features include side-by-side comparisons of the game over time and a behind-the-screen look into the franchise. Other features include a table of contents, fun facts, a timeline and an index. Full-color photos and action-packed screenshots will transport readers to the heart of each video game empire! Aligned to Common Core Standards and correlated to state standards. Checkerboard Library is an imprint of Abdo Publishing, a division of ABDO.

The Game On! series takes readers behind the scenes of popular video game franchises to learn how their favorite games were developed and have changed over time. The books’ clean layouts feature sidebar facts and captioned photos of the featured games, their creators, and respec­tive gaming consoles. Short chapters, ranging two to four pages, give readers an overview of the gameplay, any record-breaking moments (sales, design firsts, etc.), and how different versions of the games have been received by fans. Animal Crossing digs into the many delightful it­erations of Nintendo’s life-simulation game, from its origins as Animal Forest (2001) to its recent desert-island setting in Animal Crossing: New Horizons (2020). The evolution of Link’s world of Hyrule is explained in The Legend of Zelda, which reveals that its fantasy setting and com­plex coding and gameplay set this game apart from the competition. Super Smash Bros. explains how changing the typical combat model, expanding the number of players allowed, and using beloved characters from other games made Super Smash Bros. “the best-selling fighting video game franchise of all time.” Tony Hawk’s Pro Skater shows how this game’s creators worked hard to incorporate skate culture into its gameplay experience, including authentic locations and music popu­lar with skateboarders. Each volume features a “Level Up” spread that compares different versions of its game and a concluding time line.

In-depth histories of some of the most popular, influential video games of all time are laid out in this series. The oldest game of the pack is the arcade classic PAC-MAN, which was the first video game to allow players to control a character. The evolution of each game from its infancy to today wasn’t full of success. Some iterations of the games, like the 2009-2010 editions of Tony Hawk’s Pro Skater, were glitchy and unpopular, but all figured out ways to come back into the mainstream. The success of these franchises over time comes from their ability to adapt and bring fresh air to the series, like how The Legend of Zelda: Breath of the Wild’s open world exploration led to it becoming the best-selling Zelda game of all time. Time lines at the end of each book offer a quick visual history for each franchise. VERDICT Interesting and surprisingly thorough, these are all excellent additions to any library.