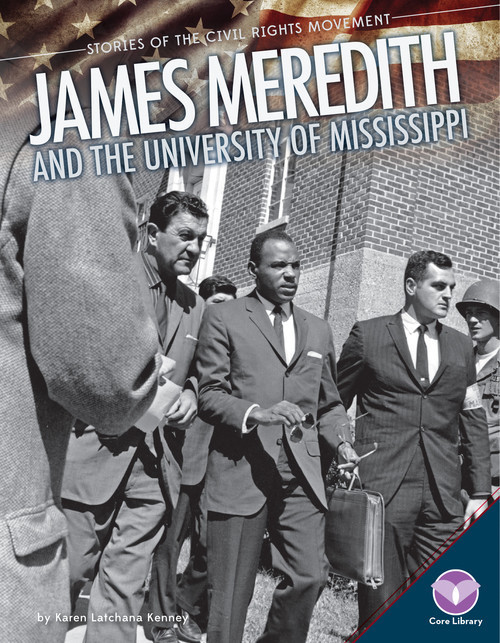 James Meredith and the University of Mississippi

This title will inform readers about James Meredith, a leader in the civil rights movement, who exercised his right to an equal education by applying to the University of Mississippi, and led a march through Mississippi to ensure the enforcement of civil rights for African Americans. Vivid details, well-chosen photographs, and primary sources bring this story and this case to life.

In the Stories of the Civil Rights Movement series, each volume focuses on a pivotal event and targets a younger audience than most books on the subject. Illustrated with many well-chosen photos, the presentations include a number of fact-filled sidebars, including a one-page feature called “Straight to the Source” offering passages from primary source documents and posing textbook-like questions designed to help students engage with the source material. . . . The series offers good introduction to some important milestones in the American civil rights movement.

For such slim volumes, the content of this set on the civil rights movement is remarkably thorough. Each title begins with the basics of the event or case in question, drawing readers in with details that give the history immediacy. . . . Each book goes on to describe issues that led up to the event in question, as well as its impact. A “Stop and Think” feature sums up each volume with questions designed to foster critical thinking skills and empathy. The illustrations consist of 19th-century paintings of plantation life and 20th-century photographs. Many of the images, such as one portraying a snarling German shepherd police dog attacking a young black man, depict the intensity of the events. Succin[ct] and often powerful, this set is a solid purchase.