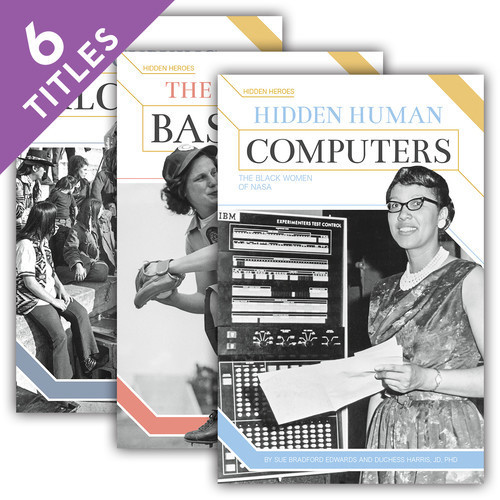 History is filled with people who overcame adversity in pursuit of social justice, equality, and fairness. But their stories are often lost or ignored--sometimes because these figures are women or members of minority groups. Hidden Heroescovers several of these important people, showing how the legacy of their work and activism remains relevant today. Aligned to Common Core Standards and correlated to state standards. Essential Library is an imprint of Abdo Publishing, a division of ABDO.

Women and minority groups overlooked by history take center stage in this essential series. From female baseball players to Native Americans demanding change to the African American women who were human computers for NASA—these are all stories that need to be told

This series highlights citizens who, despite challenges and substantial sacrifices, chose to forego their own personal aspirations in order to devote time and effort to benefit society. Each volume includes b&w and color photographs and illustrations, as well as essential facts on important figures, key works, social impacts, and a pertinent quote. This series is a necessary acquisition for secondary school libraries. Recommended

★STARRED★ For students wanting to know more about the African American female NASA workers depicted in the movie Hidden Figures, there’s just such a volume in the Hidden Heroes series. Because some readers may associate computer with machines, the authors give a thorough explanation of how humans were first used as computers to solve difficult mathematical and physics problems before today’s computers were invented. After identifying early black women pioneers in math and science, the book focuses on how WWII created opportunities for black women to serve as computers in the defense industry and the National Advisory Committee for Aeronautics (NACA), which later became NASA. It describes the roles of these groundbreaking computers, as well as the double discrimination they encountered as women and as African Americans. Archival photos and sidebars enhance the appealing text, which concludes with a brief look at black women who made more advances as astronauts. Extensive back matter, including a time line, facts, additional resources, and a glossary, extend the research value. An essential purchase for STEM collections.

A look at people who by dint of determination and skill shaped social, political, and professional arenas but typically have received little or no attention for their efforts. The coverage is thorough. Content includes not only details about what the featured groups did and why but also significant backstory…The writing is matter-of-fact and unbiased. In The Stonewall Riots, the violence perpetrated by police against protestors is addressed along with the reaction of the protestors. The illustrations consist of archival drawings and photos. . . . The material is solid. Good selections for libraries looking for U.S. history that has often gone unacknowledged.