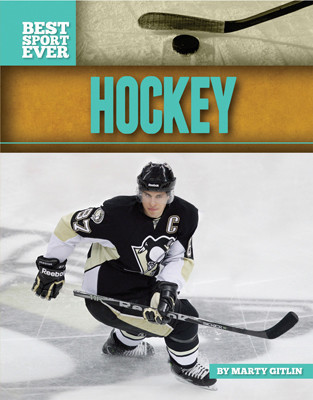 Best Sport Ever: Hockey takes readers from the beginnings of hockey to present day with a focus on the legends, the amazing stories, and the unique characteristics that makes the sport great. Discover the early games of hockey, the equipment used in the game then and now, the thrill of the Miracle on Ice, and the achievements of Maurice "The Rocket" Richard, Jacques Plante, Bobby Hull, Wayne Gretzky, Cindy Curley, and so many others in this amazing overview of the Best Sport Ever: Hockey! Through colorful descriptions, a glossary, additional resources, engaging sidebars that go "beyond the basics" into advanced skills and health benefits, and more, the Best Sport Ever series is a can't miss for today's sports fan.

This series celebrates eight popular sports and cites the reasons that so many people are passionate about them. Each volume draws readers in with a chapter describing a key moment in that sport’s history. For example, Hockey highlights the 1980 “Miracle on Ice” when the U.S. Olympic team defeated the Soviet Union. Subsequent chapters are devoted to the earliest history of each game, how it developed into its current form, and key players from the 19th century through the present. The coverage is international in scope and discusses women’s entry into the playing arena and some of the stars. The thorough and engaging texts are complemented by abundant photographs. Sidebars expand on the main text. . .