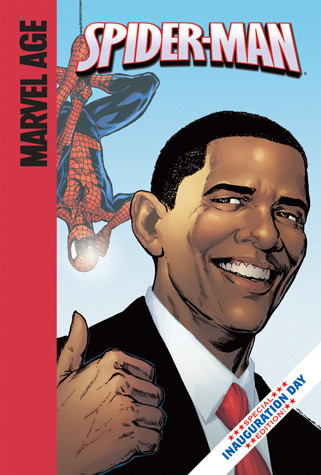 It's a Brand New Day for the United States of America and Spider-Man's along for the ride! To celebrate the upcoming inauguration of Barack Obama, Marvel is proud to present an all-new story teaming up one of the world's most recognizable political figures with the world's greatest super hero as President Obama joins Spider-Man in "Spidey Meets the President!" Written by Zeb Wells with art by Todd Nauck and Frank D'Armata, the story takes place in Washington, D.C. on Inauguration Day and finds one of Spider-Man's oldest foes attempting to thwart the swearing in ceremony of the 44th President of the United States. Spotlight editions are printed on high-quality paper and with reinforced library bindings specifically printed for the library market. Grades 2-6.