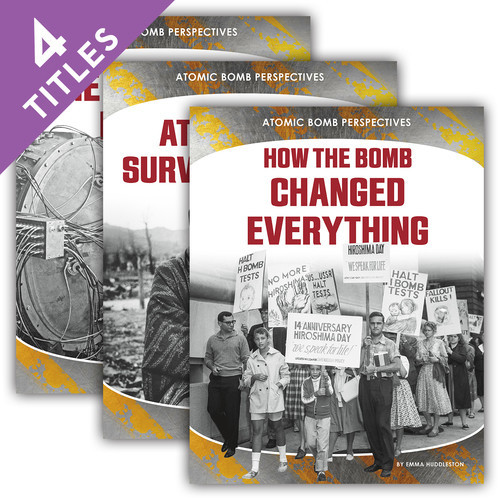 In August 1945, the US government dropped two atomic bombs on Japan to end World War II. The bombings forced Japan to surrender, but they left a complicated legacy. Survivors, soldiers, scientists, and many other people had their own perspectives on the bombings. Atomic Bomb Perspectives helps readers explore people's experiences and points of view, giving readers firsthand accounts of historical events. Aligned to Common Core Standards and correlated to state standards. Core Library is an imprint of Abdo Publishing, a division of ABDO.

These four fact-focused titles explore the various aspects of the first two atomic bombs. The Manhattan Project details the research and development of the bombs, The U.S. Decision To Drop the Atomic Bomb explores the various views for and against the bombs’ employment, Atomic Bomb Survivor Stories describes the devastation to Hiroshima and the resulting deaths caused by radiation, and How the Bomb Changed Everything discusses subsequent events including the Cold War and nuclear protests…. These volumes lend themselves well to reports but browsers will pass; selectors should consider their need for the topic.